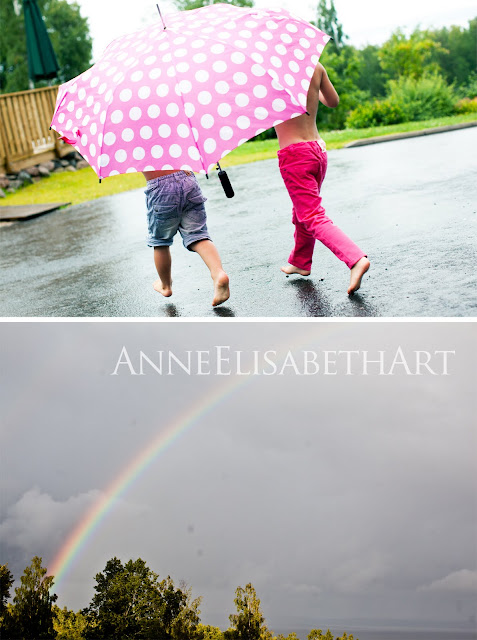 The last few days have been full with clouds and rain. I have been trying to ignore this by wearing short pants and T-shirts (well okay.. especially dresses), but today I gave in.. I wrapped a blanket around me as I was sitting outside talking with a friend. Nothing you would wish for when it´s summer!
A while after that my son came running out with only his pants on. He held his hands in the air while lifting his head towards the sky with his eyes closed. His cousin came running after him with an umbrella and together they ran through the garden. My whole weather perspective already changed just looking at them.
Later that day I was supposed to do a family photo shoot down the road at our neighbors but the rain kept pouring from the afternoon till the evening. So we waited, and waited.. and then all of a sudden around eight, this bright rainbow appeared in the sky and after the sun even came to visit us! It felt like a present.. as a reward after I had this one moment of appreciation when I looked at those two little ones running around, no matter what kind of weather it was..
Posted by Anne Elisabeth at 11:26 PM